The wheel has come full circle and after sixty years the boys and girls of Allenwood once more attend a mixed school. This time however they will are mixed in the true sense of co-education with boys and girls in the one class.

In 1957 the girls moved out of what is now known as the boys’ school to the girls’ school building. The boys moved up to the girls’ building for a year while renovations were taking place in the boys’ building. However the two groups were segregated at all times with the girls occupying two rooms on the right and the boys occupying the two on the left. The Ballroom of romance comes to mind!!

The decision to amalgamate came as no great surprise as it has been a topic of conversation for many years now.

In 2006 following a whole school evaluation (WSE) in the boys’ school it was recommended that both schools amalgamate. Meetings were held at that time but it was felt that the timing was not right.

However the possibility of amalgamating both school never really went away.

With the population growing and both schools, building new classrooms the prospect of amalgamation was once again raised.

On the 7th March 2017 the boards of management of both schools met to discuss the possibility of amalgamation.

There was a consensus among the staff of both schools that by pooling the resources and staff, amalgamation would provide an enhanced educational experience for the children of Allenwood.

It was agreed at that meeting to issue a survey to the parents to assess the level of interest in the proposed amalgamation. The survey was sent out to the parents the following day.

The results of the survey were as follows: 175 surveys were given out.

145 votes in favour of amalgamation

12 votes not in favour

4 voted yes with questions (which were answered favourably)

14 papers were not returned.

Following this positive result it was decided to proceed with the amalgamation.

Both boards of management along with the school principals liaised with the Department of Education to progress the merger.

The Department of Education informed the Patron on the 23rd June that the amalgamation would go ahead and that the school would reopen as a co-educational school occupying the two buildings on August 30th 2017.

A manager has been appointed by the patron to work with the incoming principal and staff to oversee the merger. A new board of management will be appointed before the end of the year.

The amalgamated school is known as Scoil Mhuire Allenwood.

The school is on one campus as the shelter and hedge between both schools was removed. All children share the same play area and there will be constant communication and co-operation between both buildings.

There will be lots of thoughtful planning and review needed over the coming year but we will work together and deal with all issues in a slow considered manner.

This is an exciting adventure for all and we hope parents and the wider community will engage with us to make this a wonderful learning experience for all. After all the children are at the heart of everything we do.

Today we said a fond farewell to Patricia Keely and we wish her the best of luck in her retirement from Scoil Mhuire Allenwood. Patricia has worked in Allenwood Schools for 35 years. She has seen many changes during that time. She seen Allenwood GNS grow from a three teacher school in the 1980's to a six teacher school when it closed in June 2017 to amalgamate with Allenwood BNS. The new amalgamated school has 14 teachers.  We were joined by Patricia's family and there was a presentation made to her from The Board of Management, The Parents Association and the Staff. Patricia spoke fondly of  her time in Allenwood and wished the newly amalgamated school every success going forward. All in attendance retired to the staff room to chat and enjoy refreshments kindly provided by the Parents Association.

On March 26th 2021 we bid a fond farewell to our Principal and friend Mrs Carole Fenton.

The day started with a Mass for Carole in the church and the school children and staff watched through the Allen Parish livestream Facebook page.

All the boys & girls went outside and social distanced in their pods all around our Astro turf pitch.

Mrs Fenton got a great surprise upon leaving the church and she was able to walk along the perimeter and wave to all the children.

It was an unusual way to have to say goodbye to someone we all knew and worked with for a long time.

Carole leaves behind a great legacy of co-education in Allenwood, where until 2017 the boys and girls were educated separately. 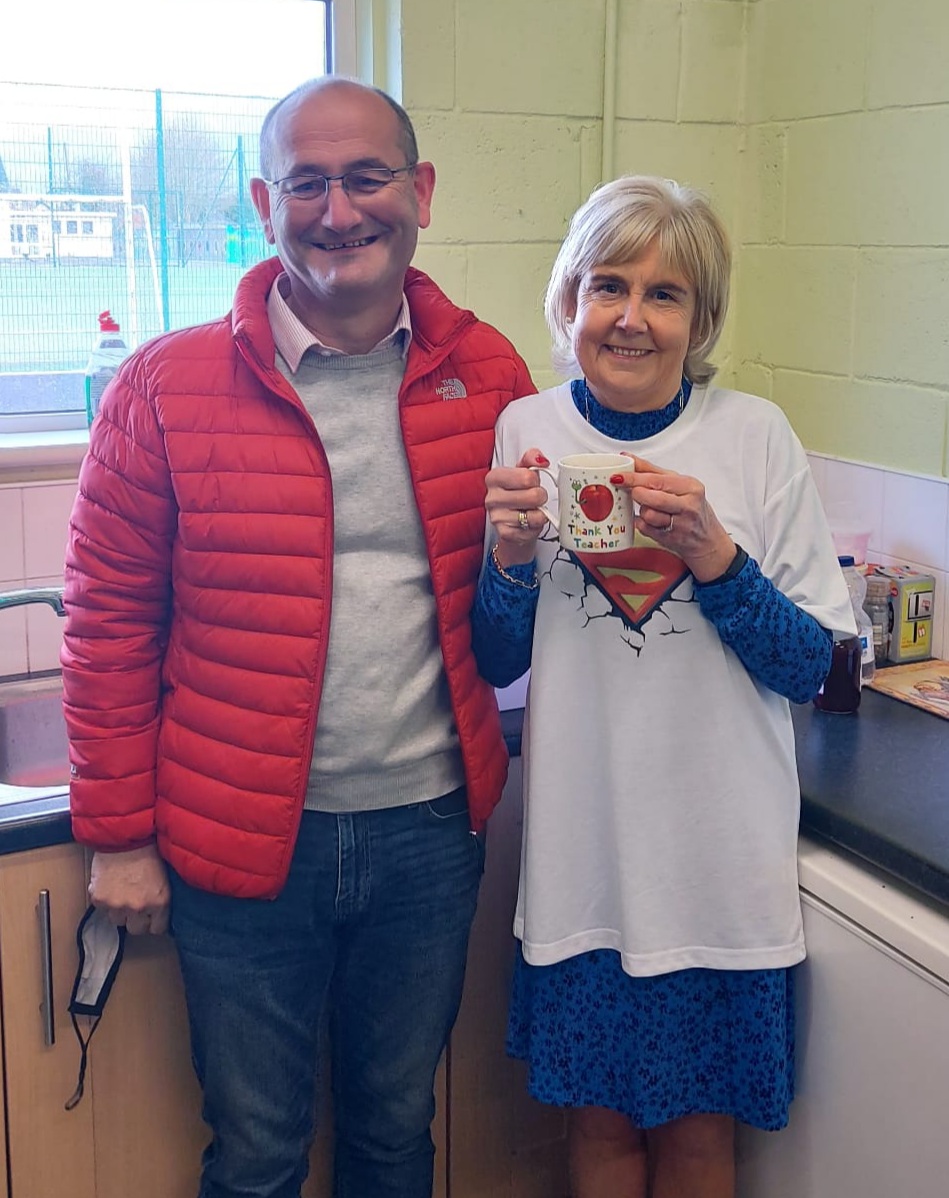 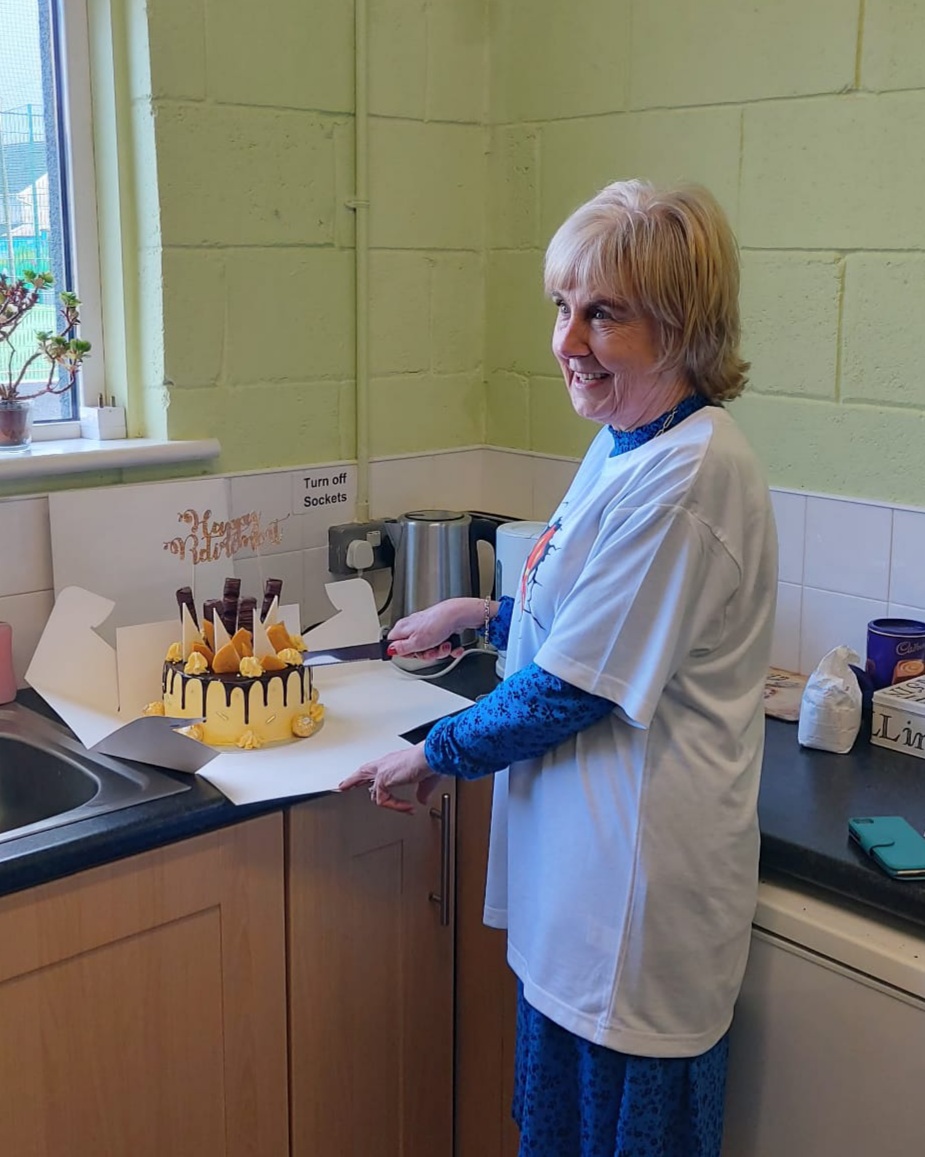 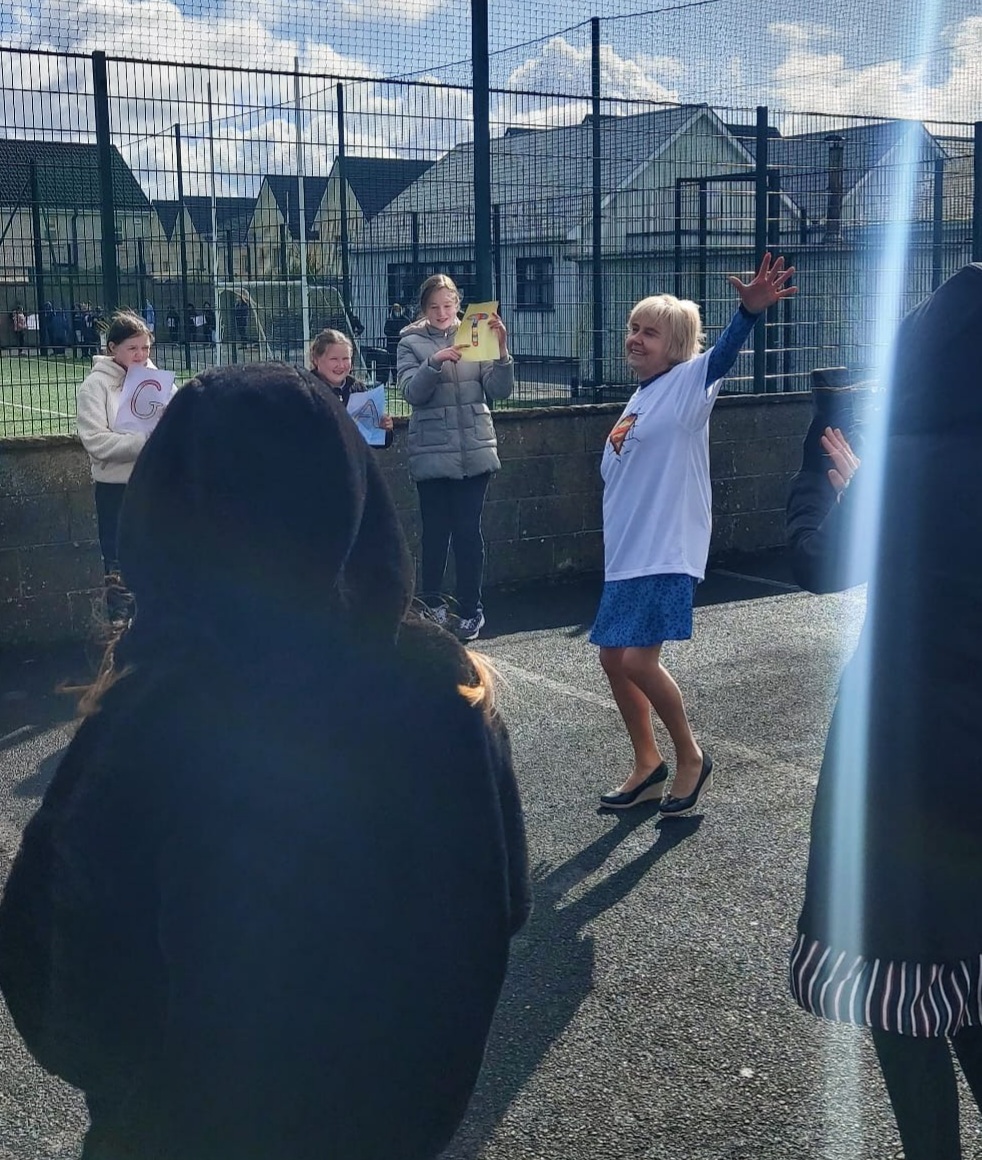 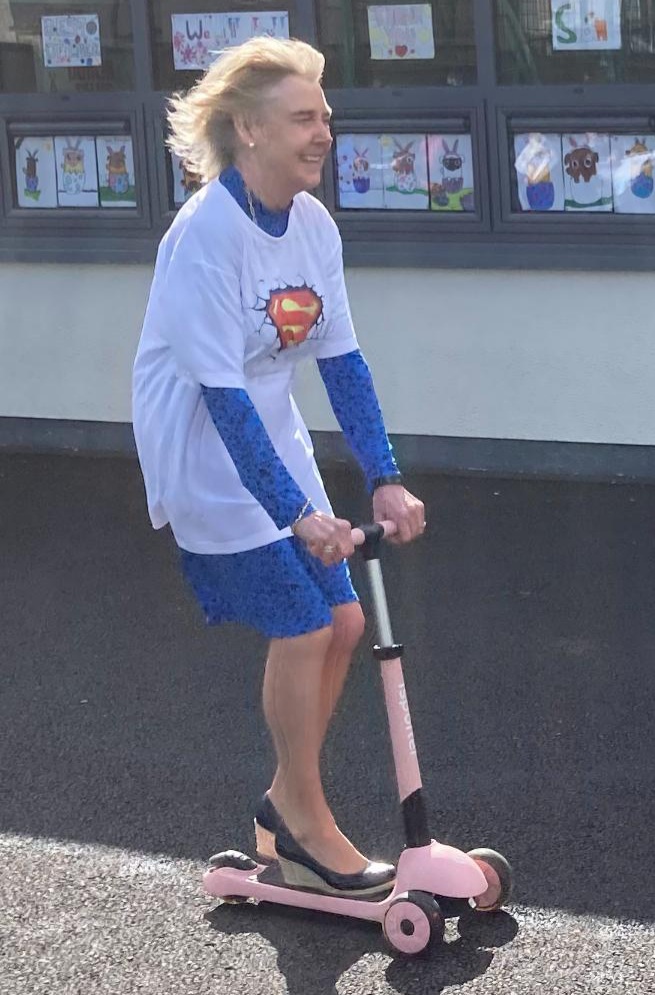 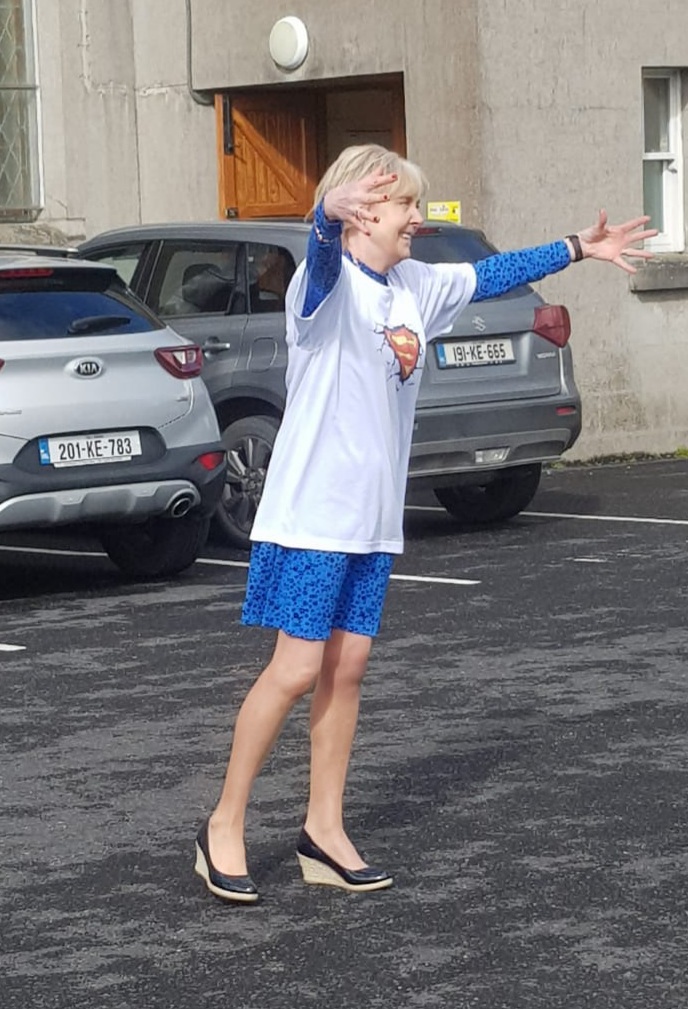 Carole Moran, originally from Athleague in Co. Roscommon, knew from the age of 3 that she was destined to follow in her mother Carmel’s footsteps to become a teacher.  She was thrilled to get the call into Carysfort Training College in 1981 and when she graduated in 1984, she taught in various schools around Roscommon.  From here she did a short stint in Scoil Chormaic, Cashel, Tipperary, but destiny called her to Kildare, where she started working in St. Marks in Newbridge on January 7th, 1987, the same day as Raymond Fenton.  Love blossomed, and in July 1990 following Carole’s Special Ed course in St. Pat’s Training college, Carole and Raymond became Mr. and Mrs. Fenton and were blessed with 2 wonderful daughter’s Emma and Ruth.

In November 1997 Mrs. Fenton arrived in Allenwood BNS and taught infants until January 2010 when she took over as Principal from Judy Curley.  Carole started her principalship in the same way she ended it, with burst pipes, but something so trivial couldn’t  phase this Superwoman (the term, given to her by some of the children) who oversaw the extension of the boy’s school to add two new classrooms and new toilets.  In early 2017 a decision was taken to amalgamate the boys’ and girls’ schools to bring about what has become Scoil Mhuire Allenwood with Carole taking over as Principal.  The new school was blessed and opened by Bishop Denis Nulty on October 19th, 2017 and has gone from strength to strength in that time.

The next year, on the 27th of June 2018, Johnny Doyle opened the school’s AstroTurf, following a huge effort by the Parent’s Association and Mrs. Fenton.  Not one to take it easy, Carole’s next project was the school garden and painting of murals, which is an ongoing project in a school the size of Scoil Mhuire Allenwood.  Since the inception of Scoil Mhuire Allenwood the school has been awarded the amber flag for mental health awareness, the Erasmus flag for wellbeing projects, the active flag and 5-star GAA flag.

Carole would be the first to acknowledge that she does not do the work alone and credits every member of the team in Allenwood for their work and always made time to listen to what people had to say.  She has a huge affection for the people of Allenwood, Allenwood GAA and the general community spirit that exists in the village.  Carole leaves Scoil Mhuire Allenwood in fine shape as she heads off to enjoy her retirement.  No doubt, once covid restrictions are lifted Carole will fit in as much travel as possible, one thing is for sure, it will not be a quiet retirement.

We all thank Mrs Fenton for her wonderful work over 23 years in Allenwood and we wish her the very best of good health and happiness in her retirement.